The Fredericksburg Regional Farmers Market Consortium consists of the farmer’s markets in the City of Fredericksburg and the Counties of King George and Spotsylvania.

GWRC served as an incubator, providing grant management and fiscal administration services, for the Consortium, which is now a stand-alone 501(c)3 non-profit.

The Meadow Historic District, the birthplace of 1973 Triple Crown champion Secretariat is located in Caroline County, Virginia.  The Meadow was purchased in 1936 by Christoper Tompkins Chenery, who created a world-class horse racing facility at his ancestral home place.  Former property owners and staff at the Farm Bureau had tried for years to get this property listed on the National Register at Historic Places. The designation included the foaling shed where Secretariat was born on March 30, 1970; his training barn, where he wore his first saddle and bridle; the yearling barn where he stayed as a colt; and a yearling barn annex, stallion barn, horse cemetery, well house and pump house.

Listing a property on”The Register” is a complex, monumental task which requires a diverse skill set and a minimum of a year to complete the Nomination Form (Form).  With no funding for this project, the Virginia Farm Bureau in Caroline County reached out to GWRC for guidance.  GWRC assisted and guided the Farm Bureau with drafting and completing the Nomination Form.  GWRC staff worked with Virginia Farm Bureau’s Secretariat Tourism Manager, Leeanne Ladin, to pull together a team and coordinate the process of completing the Form.  The team assembled to work on the Form consisted of people with necessary skills and a GIS Specialist.  Instrumental in the two-year effort were the Virginia Department of Historic Resources, the George Washington Regional Planning Commission, planners Diana Utz and Danny Reese, historic preservationist Eden Brown and the Caroline County Department of Economic Development and Tourism.

The Form was submitted and revised in preparation for review by the Virginia Board of Historic Resources and the Virginia State Review Board.  The Boards voted unanimously to place the Meadow Historic District on the Virginia Landmarks Register on March 19, 2015.  The property, which dates to 1805, is owned by the Virginia Farm Bureau Federation.  After additional revision work, the Form was submitted to the National Park Service.  On May 16, 2015, the Meadow Historic District was placed on the National Register of Historic Places.  As a result of being listed on both Registers, The Meadow has received a tremendous amount of positive media exposure through all mediums, State and National. 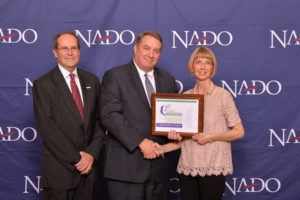 On October 26, 2015. the George Washington Regional Commission (GWRC) received a 2015 NADO Innovation Award for the Commission’s work on “The Nomination of The Meadow, Birthplace of Secretariat, to the Virginia Landmarks Register and the National Register of Historic Places”.